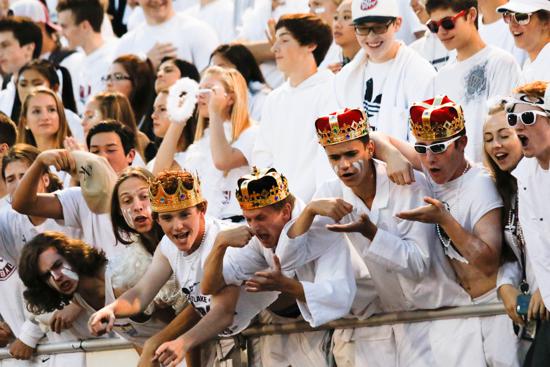 The excitement started building early in the day as the Wolves faithful arrived at Eastlake for the KOMO News filming of a 6 am pep rally.  This game honored our youth by inviting them to the game; Junior Football players and Youth Program Cheerleaders took their places and helped cheer on the Wolves’ players as they entered the stadium.  They were taking on the Bothell Cougars (ranked 16th in the state).  The smell of grilled hot dogs and popcorn filled the air as the student section frenzy escalated, and everyone’s attention shifted to the field to watch the kickoff.

On Bothell’s first offensive play, Eric Plummer showed that he was ready when the sound from his hit emanated throughout the stadium.  Then Parker Lester broke up a pass attempt.  A play later he picked up a fumble and returned it for 15 yards and the Wolves took over on offense. 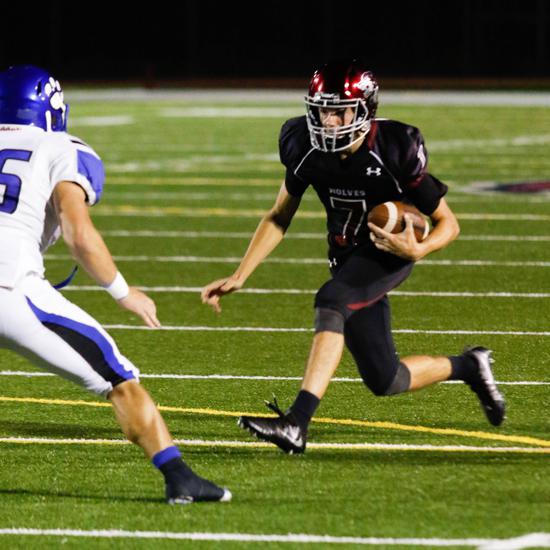 The Wolves lost 8 yard loss on their first down, but Ben Howard made up for it with a 19+ yard QB keeper on the next play.  The offense stalled after that and Howard had to punt.  He kicked a booming punt that hit the ground and rolled to a stop 56 yards down field.

Bothell’s highly touted QB started out strong, and connected with his receiver for an 18 yard gain.  Then he led his offense further down the field.  However, they were slowed when Plummer and Spencer Thompson tackled the ball carrier for a 3 yard loss.  Then, on third down, Hank Pladson broke up a long pass in the end zone and then he nearly blocked the field goal attempt, causing a rushed kick and the ball sailed wide left; score 0-0. 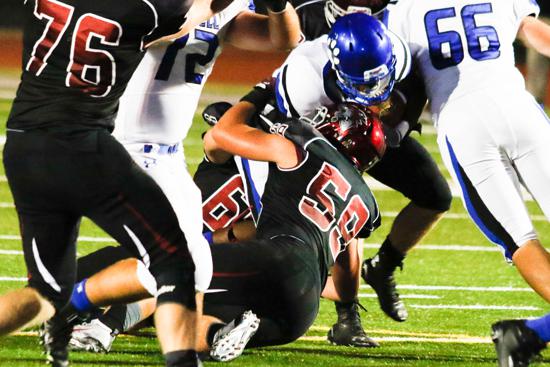 Chris Nelson rushed for 7 yards on the last play of the 1st quarter.  The Wolves’ drive continued as the second began when Howard tucked the ball under his arm and out maneuvered several Cougars to gain 7 yards.  Then Nelson had another impressive run and gained 6 more yards.  It looked as though the momentum was changing in the Wolves favor as Lester caught a perfect pass from  Howard for a 32 yard reception.  Two plays later he caught another pass for 6 more yards.  However, it was all to no avail as the drive slowed and the Wolves were forced to punt the ball.

Bothell returned the punt 9 yards and took over on offense.  They had a few positive yardage plays and even a first down following a Wolves’ face mask penalty.  However, they weren’t able to make any further progress and punted the ball back to the Wolves. 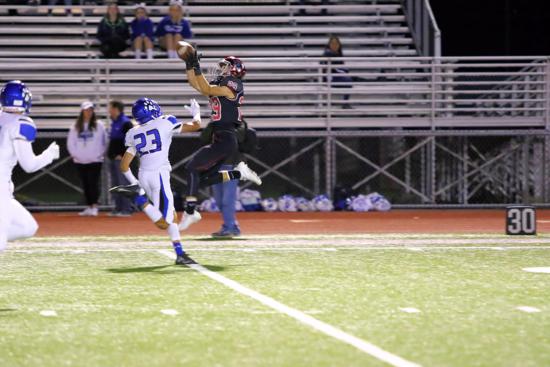 The Wolves next series didn’t end up with a score but definitely had its exciting moments.  One involved Howard who launched the football 45 yards down field toward Pladson.  Pladson briefly took hold of it just as a Cougar hit him and knocked it to the ground.  The other involved Kyle Sihon who fell on a fumble to save Eastlake from a costly turnover in the Cougar territory.   Another was  Howard gaining 14 yards on a QB keeper.  Then an over exuberant Wolves’ coach was penalized when he commented to a referee that he felt that our receiver was interfered with on a 20+ yard pass.  This set the Wolves back, and they turned the ball over on downs on the next play.  Bothell took over with 1 minute and 34 seconds in the half and proceeded to march down the field quickly.  The Cougars QB dropped back, under heavy pressure from several Eastlake defenders, and threw a desperation pass into the end zone.  Plummer saw it, got in perfect position, and intercepted the ball to the elation of Eastlake fans who immediately started screaming and high fiving each other.  The Wolves took over and ran a play before the clock expired and the first half came to an end, with the score 0 to 0.

Bothell returned the 2nd half kickoff 10 yards. Then Noah Morse took advantage of a poor snap that sailed over the QB’s head. Noah tracked the QB down and sacked him for a 13 yard loss.  Then, the QB ran for 17 yards.  It was fourth down and 17 yards when Jack Hart blocked the punt and Ryan Stinnett recovered it deep in Bothell territory.

A few plays later Nelson charged through the defense and into the end zone for 8 yard run and touchdown, the first points of the night.  The Cougars blocked the PAT; score 6-0 Wolves. 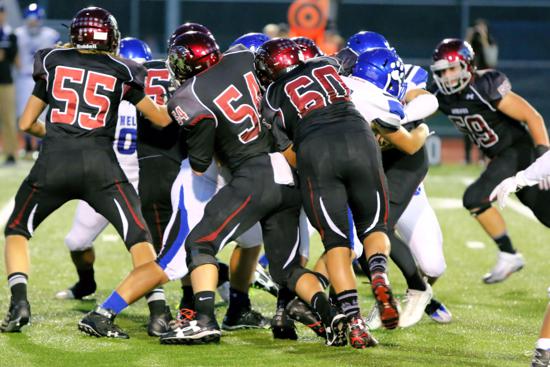 The Wolves side of the stadium erupted briefly as the Bothell returner dropped the kick off on the 5 yard line, but the Cougar quickly quelled the crowd when he picked it up and proceeded to return the ball 40+ yards before being tackled at the 45 yard line.  The QB was pressured and threw an incomplete pass.  Then he threw the ball under heavy pressure, but this time, Pladson was in position and intercepted the ball.  He ran a few yards before being hit and fumbling the ball.  Thankfully, Hunter Klinge was close by and pounced on it to maintain possession.

The Eastlake fans excitement faded and the stadium grew quiet as Howard threw a 40 yard pass that was bobbled and dropped, forcing them to punt the ball.  The Cougars next series was also unsuccessful and they punted after three plays.  The crowd noise picked up when Nelson took advantage of excellent blocking by Plummer and Sihon and burst through the defense; 31 yard run stopped at the 29 yard line.  The excitement was short lived and the Wolves turned the ball over after a 2 yard gain and three incomplete passes.

Bothell got their offense in gear and gained 12 yards and then 13 yards on successive plays.  Their production seemed to slow, but they took a chance and went for it on 4th down and 9 yards.  Their gamble paid off and they gained 19 yards for a first down as the 3rd quarter came to an end.  The Cougars scored just as the fourth quarter started on an 8 yard run, then kicked a successful PAT and Bothell was up by 1; score 6-7 Bothell.

Colin Payne fell on the Cougars’ squib kick off on the 29 yard line.  After a 3 yard gain, Howard dropped back to pass and saw that Cody Cox had outrun his defender and threw him a perfect pass.  Cox caught it and ran into the end zone recording a 68 yard TD reception.  The Wolves’ side of the stadium went wild and that was muted slightly when their 2 point conversion was stopped; score 12-7 Wolves.

The Cougars mounted a very successful drive and scored on their next series.  They were successful with their 2 point conversion.  With 4:11 left to play the score was 12-14 Bothell. 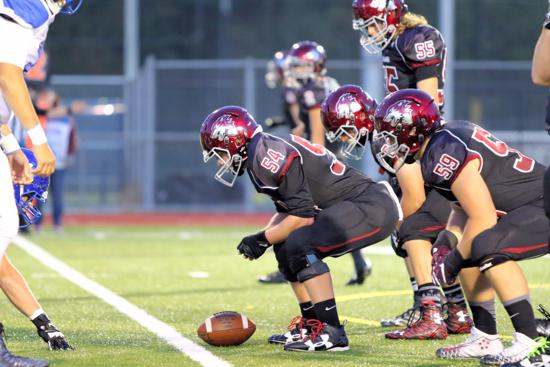 The Wolves showed no signs of giving in as they quickly responded with an 11 yard reception by Hunter Klinge.  Then Ben Howard gained 7 yards on a QB keeper.  The Eastlake fans couldn’t contain themselves and erupted with cheers, yelps of joy, and utter elation on the next play as the Wolves scored on a 49 yard TD reception by Nelson.  This was followed by a successful PAT by Taige Thornton, and with 2:48 left in the game, made the score 19-14 Wolves.

It felt as though this night would end with an Eastlake victory.  The Cougars hadn’t given up and pulled a trick play out of their hat; they called a flee flicker that wasn’t noticed fast enough by the Wolves defensive backs.  A 55-yard pass was caught by the Cougar receiver, who fell down at the 4 yard line.   The Cougars scored on the next play and kicked the PAT; and with 1:15 left in the game, the score was 21 to 19, Cougars.

The Cougars didn’t shy away on their kick off.  The sent it sailing to Klinge who received it and returned it 20 yards.  The emotional roller coaster continued as the Wolves offense went to work and showed they wouldn’t give up.  Pladson caught a 30 yard pass and then a 13 yard pass.  Everyone felt Eastlake had a real chance to win and do so in memorable fashion.  However, their progress was severely impacted when a Wolves’ lineman was called for holding on the next play and the pace-off put the ball on the 42 yard line.  It was now 1st down and 25 yards to go.  On the next play Cox caught a pass for a 15 yard gain.  It was 2nd down and they had 10 yards to go for a first down with only 23 seconds left.  The confidence of the Wolves and their fans permeated the air as Howard took the snap and dropped back to pass.  The defensive pass rush was strong and Howard had to throw the ball away to avoid being sacked.  On the next play Howard again dropped back to pass but all of his receivers were covered and he again threw the ball incomplete.  It was now 4th down and they still had 10 yards to go with only 14 second left on the clock.  This was it.  They had to gain 10 yards for the first down. Howard again dropped back to pass, and time seemed to slow as Howard scrambled under immense pressure.  But Howard couldn’t avoid his pursuers and forced a desperation pass into heavy coverage where it was intercepted by a Cougar. 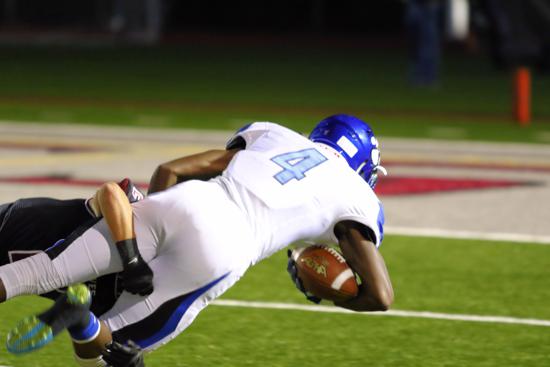 The Bothell fans celebrated as the Cougars took over on downs and their volume grew as they watched the clock tick down to zero.

The Wolves fans looked on in disbelief.  They had lost another close one to a worthy opponent.  They stood in silence for a moment and stared at the score board, wishing the score didn’t display Eastlake 19, Bothell 21.

Please come out to cheer on the Wolves next week Friday as they take on Mount Si ranked 38th in the state.  It will be an exciting game at the Wildcat’s stadium!

Thanks to Padgett, Mohrhardt and Bradley for providing excellent photos.