Friday, Eastlake took the field on a beautiful night against conference foe Newport.

With a rowdy technicolor-themed student section rooting them on, the Wolves sought to rebound from last week's final-play loss to Mount Si. By the time Carter Cox pounced on a fumble for a touchdown in the 3rd quarter, the game had played out like a Chicago city council election with the Wolves scoring early and often on their way to a 59-21 win. 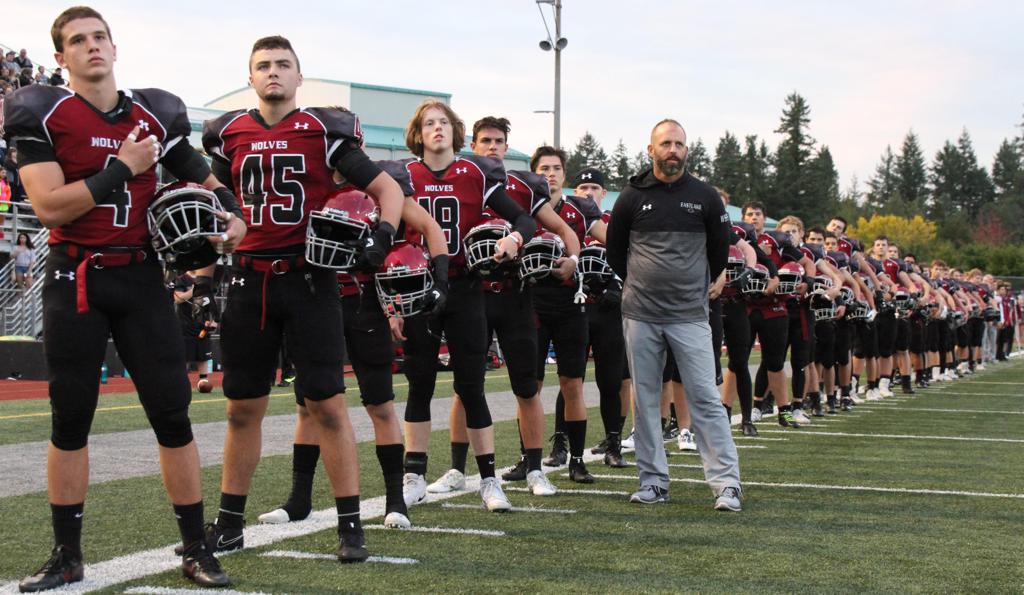 The Wolves got on the scoreboard quickly. Garret Carney returned the opening kick to the 44. after a penalty put Eastlake in 3rd and 19, Brown found Hank Pladson for 32 yard and a first down. Nelson ran behind Doran for a first down, then, aided by a nice block from Jaxen Williams, took a swing pass in for Eastlake's first touchdown. When Jack Matheson nailed the PAT, Eastlake led 7-0.  On the ensuing kickoff, Scott Tornquist hit the returner deep in Newport territory before Carter Cox brought him down at the 21. Then, Newport fumbled the exchange on its first play from center and Doran jumped on the ball. With a short field, Nelson once again ran behind Doran, scoring from 13 yards out. Matheson was perfect again and Eastlake led 14-0 just two and a half minutes into the game.

On Newport's next possession, they started to move the ball but a tackle-for-loss by Sam Milton and 3rd down tackle by Pladson stopped the Knights and forced a punt. Eastlake set up on their own 42 and Brown went to work quickly, hitting Nate Sutter for 18 yards. On the next play, Chandler took the ball on a jet sweep before pulling up and throwing a 28-yard touchdown pass to a wide-open Pladson. Matheson was good again and Eastlake went up 21-0 in the first quarter.

Credit Newport who kept battling despite their poor start. Quarterback Branden Steinberg hit his big tight end Marcus Fukutomi on a seam route for 52 yards. From there, Newport punched it in but botched the PAT, making the score 21-6 Eastlake. The Wolves came right back with Brown hitting Jaxen Williams with a laser throw for 42 yards to the Newport 7. Two plays later, Brown hit a wide-open Chandler for an 11 yard touchdown. 28-6 Eastlake, and the game was still in the first quarter.

The Knights kept battling, overcoming another tackle-for-loss by Milton and a Thompson sack to score on a long touchdown drive. With the score 28-13, the game briefly got interesting when a sack on Brown forced the Wolves to punt from their own end zone. However, Matheson booted a clutch 38-yard punt to give the defense a chance. In their drive, Newport went for it on 4th down but a tackle by William Woodgate forced the Knights to turn the ball back over to Eastlake. On the ensuing 3rd and 12, Nelson took a swing pass from Brown 54 yards for a touchdown and the game was effectively over as the Wolves went up 35-13 at the half.

In the second half, Newport scored one more TD, aided by an Eastlake penalty. But the Wolves kept moving the ball at will. Jack Hart took an option pitch for 19 yards, followed by a Brown-to-Sutter screen pass for 21 yards. After a 13-yard bubble screen to Chandler, Nelson ran three straight times for 26 yards, carrying tacklers into the end zone for another touchdown.

After the offensive explosion, Eastlake's defense got in on the action late in the 3rd quarter. After a three-and-out, Newport attempted to punt from its own end zone. When the punter bobbled the snap, junior safety Carter Cox jumped on the loose ball for an Eastlake touchdown that put Eastlake up 49-21 late in the quarter. Finishing off the scoring, Nelson ran in another TD, this one from 13 yards and Matheson added a season-long 40 yard field goal.

As the 2nd team finished the game and the seconds ticked off the clock, the Wolves celebrated a fun 59-21 victory. Nelson got the headlines with his 5 touchdowns his linemen deserve credit for their work up front. Brown's threw the ball well all night, using his variety of playmakers to pile up the points. The Wolves also got ongoing production from senior kicker Jack Matheson who has been flawless on PATs this year in addition to his long field goal. Matheson's strength and accuracy gives the Wolves a weapon they haven't had since Zack Howard graduated.

Defensively, Thompson, Doran and Woodgate all had strong games which is critical against the Newport power rushing attack. Kennedy moved from tackle to linebacker and did a credible job filling in for injured teammates. And Sam Milton continues to come on as a run stuffer in the middle, aided by the fast-learning Garret Carney.

With the win, the Wolves move to 2-2. Next week, the Wolves return to Pop Keeney for a huge Saturday night matchup against the Bothell Cougars.
Thanks to Simon Puttick, Chad Greene, and Jeff Steinbok for photos!