The scoreboard and the standings are merciless and they award no points for moral victories. The fact remains, the Eastlake Wolves played as gutty a game as you will ever see against an equally tenacious opponent before ultimately falling to Skyline 31-24

Pound for pound, Eastlake was the best team on the plateau Friday night. The problem is, football isn't boxing and there is no pound-for-pound scorekeeping. So, at the end of an epic, triple overtime thriller, Skyline had more pounds and used those to hold Eastlake 1 yard short of the end zone and walk away with a 31-24 win.

After back-to-back turnovers in the first 2 plays from scrimmage, highlighted by Hunter Klinge's strip of the ball after a long Skyline completion, both teams settled down and slugged it out in a hard-nosed, physical contest. Early in the game, Connor Brown was searching for his rhythm throwing the ball and Chris Nelson was searching for running holes. Skyline meanwhile couldn't get much going through the air but got their stocky running back, Prescott Wong, going behind their big offensive line. Early in the 2nd quarter, Skyline used some effective scrambling from quarterback Joseph Green and eventually Wong punched in from the one yard-line, giving the Spartans a 7-0 lead.

Dalton Chandler sparked the Wolves on their next possession, returning the kickoff to the 44. However, the momentum was short lived. After a couple of Nelson runs, a false start and incomplete pass, the drive stalled and Brown punted the ball away.

Zach Kennedy, who recently moved to linebacker, stepped up to slow the Spartans attack when he pressured Green on 3rd and 6, forcing an incomplete pass. After a poor Skyline punt, the Wolves set up on their own 40 with good field position and another opportunity to drive the ball. The Wolves used a mix of short passes to Pladson sprinkled with Nelson runs to move the ball. On 3rd down, Brown hit Nate Sutter for 9 yards to move into Skyline territory.  Wong sacked Brown on the next play, pushing Eastlake back but a shovel pass to Nelson got 6 yards back. After overthrowing Pladson, the Wolves went for it on 4th and 8. This time, Brown found his man, hitting Hunter Klinge for 17 yards to the Skyline 13 yard line. After a couple of plays went nowhere, Eastlake faced 3rd down and 16. But Brown, a smart quarterback did what a smart quarterback does - he found his playmaker Pladson at the 4 yard line and Pladson broke tackles to go in for a touchdown. After Jack Matheson hit the PAT, Eastlake tied the game at 7-7 with 1:22 before halftime.

Eastlake took the 2nd half opening kick, hoping to capitalize on another big return by Chandler, this time to the 37. But this was also when Skyline's stout defensive line, none tougher than Matthew Cindric, started to put their imprint on the game, sacking Brown on 3rd down. After a short punt gave Skyline good field position, they started pounding Wong with off tackle runs. Connor Doran made a nice play to bring up 4th down but Wong promptly busted one up the middle for the first down. From there, the Spartans used a steady dose of Wong with the occasional Green pass to march down the field. Once close to the goal line, Wong found pay dirt. After Carter Shane hit the PAT, Skyline led 14-7 with 5 minutes left in the 3rd quarter.

It looked like the Spartans might pull away as the Wolves offense continued to miss plays and just couldn't find a rhythm, resulting in Skyline fielding a punt at their own 41. To compound Coach Bartels worries, Brown took a monster hit on his last pass attempt. However, the Wolves tough senior captain promptly shook off the hit and didn't miss a snap. Skyline made some progress with Green hitting Evan Alexander for 19 yards into Eastlake territory. However, on 4th and 8 from the Eastlake 35, another Wolves captain, Spencer Thompson, sacked Green, forcing a turnover-on-downs to give the ball back to his offense.

Sometimes football coaching is simple. If you have the best player in the conference, put the ball in their hands and let them go to work. So, with 43 seconds remaining in the 3rd quarter, Brown and the offense went to work. Nelson carried for a short gain, then Brown hit Pladson with a short pass, which featured Pladson dragging tacklers into Skyline territory. Then, with a first down on the Skyline 40, Coach Snell went deep into the playbook, calling a reverse pass - Nelson handing off to a reversing Pladson who threw it on a dime to a streaking Nate Sutter for a 40 yard touchdown. Matheson drilled another PAT and the game was tied 14-14 early in the 4th quarter. Little did fans know, the game was just getting interesting.

Off a strange pooch kick from Eastlake, Skyline set up with great field position on their own 47 on the next possession. Green's scrambles and Wong runs got the Spartan's going before Jack Hart shot down the line and stopped Wong for a 1 yard gain. On 3rd and 3, William Woodgate pressured Green into a scramble before Reed Payne finished the sack, forcing a Skyline punt from the Eastlake 40. Although the Wolves feisty defense stopped the Spartans, it looked like Skyline had flipped field position when Shane's punt settled inside the 1, putting Eastlake 99 yards from the end zone. But the Wolves didn't blink. On 3rd down, Brown threw a gorgeous 42 yard pass, which Sutter hauled in with a spectacular diving catch at the 44 yard line. Although Eastlake couldn't finish the drive, the big play had yielded critical field position and helped Eastlake flip the field.

Back on defense with 6 minutes left in the game, senior Caden Snyder made his first appearance of the season, promptly stuffing Wong after a 1 yard gain. After another stop by Thompson, Green scrambled before hitting Nathan Brandt for a first down near midfield. Once again, the Wolves defense rose to the challenge when Pladson stopped Brendan Bice for no gain. Finally on 3rd down, Green scrambled again but this time Reed Payne stopped him just short of the first down by marker.

After Skyline's punter (Shane) got off a nice boot with 3 minutes left in the game, Eastlake had the ball at their own 25 and the opportunity to drive for the win. Brown hit Pladson for 18 yards, with Pladson once again breaking tackles and adding yards after the catch. Another Pladson reception put the ball at the Skyline 21 and into Jack Matheson's field goal range. However, Skyline tackle Matthew Cindric took over the game, with 2 consecutive sacks of Brown pushing the ball back to the 32 yard line. Facing a 4th down with 20 seconds on the clock, Eastlake sent out Jack Matheson to try a NFL-length 49 yard field goal for the win. Matheson hit the ball squarely and it sailed toward the goal before just clipping the left upright and falling to the turf, no good. 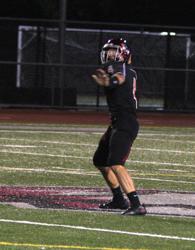 With 20 seconds on the clock, Skyline was content to run out the time and go to overtime. Skyline took the ball in the first overtime and Eastlake were in a great position for the win when the Spartans appeared to fumble the ball away to the Wolves. After officials ruled the play was not a turnover, Wong ripped off a run to the 12 yard line. Once again, Reed Payne stepped up with a 7 yard tackle-for-loss, putting Skyline in 3rd and 19. When the Wolves defense held, Shane hit a field goal to give the Spartans a 17-14 lead.

Eastlake's chances looked slim when Cindric began dominating the tired Wolves line, resulting once again in two straight Brown sacks and forcing Matheson to try a 46 yard field goal to extend the game. This time, there was no doubt as Matheson's powerful kick split the uprights and tied the game once again, 17-17.

In the 2nd overtime, the Wolves wasted no time and sent their fans into delirium when Brown hit Pladson on the first play with a bubble pass that Pladson took in for a 25 yard touchdown. After Matheson's PAT, the Wolves led 24-17 and had Skyline on their heels. But credit the Spartans - this was not the Skyline super-team of the past but it was a tough group of kids who wouldn't go down without a fight. Green hit Alexander to the 11 yard line. After nice stops by Kennedy and Thompson, Skyline was just short of the goal. However, Wong and the Spartan's powerful line found the end zone once gain to tie the game at 24. 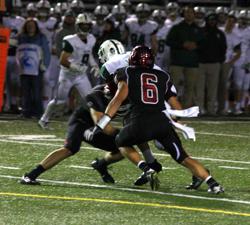 Now in triple overtime, each team set up at the opponent's 10 yard line. Skyline kept it simple, bunching 11 big bodies into a tight formation and pounding Wong straight ahead with a playbook from the 1950s. The Wolves exhausted defense battled but couldn’t stop the run, and Wong punched in another touchdown, putting Skyline up 31-24. Eastlake had one last opportunity. They tried the catch the Spartans napping with a counter to Hart on first down and the play gained a yard. A dropped inside screen on 2nd down brought up 3rd down and once again under duress, Brown scrambled to the 8 yard line. With fans from both teams screaming, the Wolves had one final play. When Brown hit the speedy Klinge on a short route, he took off for the pylon and it looked like we were headed to a 4th overtime. However, credit the Spartan defender for a terrific play as he closed the gap quickly. At the one yard line, Klinge lunged for the pylon but the hit knocked him out of bounds a yard short, and suddenly, and painfully for the Wolves, Skyline erupted in celebration.

The scoreboard and the standings are merciless and they award no points for moral victories. The fact remains, the Eastlake Wolves played as gutty a game as you will ever see against an equally tenacious opponent. Brown wasn't at his best but in the face of a relentless pass rush he was tough and fearless, keeping the Wolves in the game with big plays. The Eastlake linemen (Spencer Thompson, William Woodgate, Sam Milton, Zach Kennedy, Connor Doran) were running on empty in overtime but they battled to the last snap. Sutter & Klinge made huge plays on both sides of the ball and Chandler sparked the team with his special teams play. Linebackers Hart and Payne made key plays all game long and into overtime. Nelson ran hard despite having no holes and Matheson continued to shine in his senior year, drilling a 46 yard field goal with the game on the line. For Pladson, it suffices to say he is the best player in the conference and one of the best to ever wear an Eastlake football uniform. 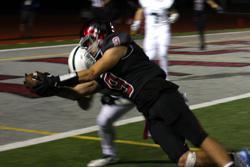 The Wolves line struggles reflect in the game stats. A week after running for 124 yards against Bothell, Nelson gained only 20 rushing yards on 9 carries. Brown was sacked 6 times. And, befitting their fits-and-starts offensive flow, Eastlake garnered only 10 first downs in the game vs. 20 for Skyline. Skyline rushed 51 times for modest yardage (145 yards) but enough to run 28 more offensive plays than Eastlake. That physical pounding, combined with Eastlake's lack of line depth showed up at the end when the Spartan's secured the win. Despite being under pressure, Brown completed 14 passes for 205 yards and 2 touchdowns. Pladson led the Eastlake offense with 7 catches for 113 yards, 2 receiving touchdowns and a touchdown pass. Sutter also had a big night with 3 catches for 90 yards and a touchdown. Defensively, it was a team effort for the Wolves with Thompson leading the team with 6 solo tackles, supported by Kennedy, Payne, Pladson and free safety Jaxen Williams.

This was a tough loss for the Wolves but one those who watched will remember for a long time. With the loss, Eastlake moves to 3-3 on the season. Next Friday, Eastlake hosts the North Creek Jaguars at 7 PM.

Thanks to Chad Greene, Simon Puttick, and Jeff Steinbok for fabulous photos!